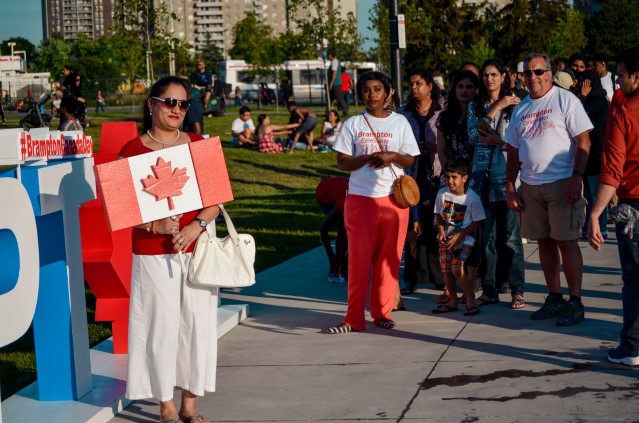 On September 1 at 7 pm, the City of Brampton will be wrapping up its summer season in Garden Square with a star-studded, music-lovers FREE ONtour Concert. As part of a year-long line-up of events marking Ontario’s 150th anniversary and celebrating the province, ONtour is stopping in more than 20 communities across the province, showcasing some of Ontario’s brightest musical talents. ONtour Brampton features musical performances by Amanda Marshall, Kardinal Offishall, JoSH the BaND and Anjulie.

This special event, which will close a portion of Brampton’s downtown core, is capping off another successful summer of culture and community in Garden Square. This summer over 20,000 Bramptonians enjoyed many of the 75 free outdoor cultural events in the Square. These events have ranged from movie nights to the popular Friday Night Live Series, which has featured some of Brampton’s most exciting up-and-coming musical talents in a double-bill with other musicians from across the GTA and beyond.

This ONtour performance marks the summer’s grand finale to the Friday Night Live Series, but the Saturday Night Movies, the Downtown Farmers’ Market and Blue Jays Sundays are ongoing in Garden Square through Thanksgiving, so keep summer alive and lawn chairs unpacked until then.

AMANDA MARSHALL – takes the stage at 10 pm
This is a rare opportunity to see three-time multi-platinum singer-songwriter Amanda Marshall perform live. Recognized as one of Canada’s most accomplished musical talents, Marshall’s debut album is one of only 18 Canadian albums to reach certified Diamond status – selling over six million copies worldwide to date. Hit singles include; “Let It Rain”, “Beautiful Goodbye”, “Dark Horse”, “Fall from Grace”, “Sitting on Top of the World” and “Birmingham”. Marshall’s anthology of talent includes sharing the stage with musical royals like Whitney Houston and Elton John, and writing songs with heavyweights like Carole King and Eric Bazilian.

KARDINAL OFFISHALL – takes the stage at 8:45 pm
Incredibly original and widely received, this accomplished Torontonian has trekked the globe, performing in the most acclaimed venues. With a musical career spanning nearly three decades,
Mr. International lends rap vocals to known artists likes Akon, Lady Gaga and fellow homeboy, Drake. Peppering in a patois-dancehall twist to create a sound of his own, Offishall moves crowds to their feet with his memorable performances and captivating persona. Performing in his only GTA-based ONtour concert, don’t miss Kardinal Offishall performing in Brampton’s Garden Square.

JoSH the BaND – takes the stage at 8 pm
Canadian Bhangra music group JoSH, comprised of members Rup and Q, has been producing, writing, and singing hit songs for over a decade and have performed in more than 25 countries. They have released four chart-topping albums selling more than two million records worldwide. Based in Canada, the duo has become the most widely-recognized Indo-Pak-Canadian bands in the world. Musical
collaborations with artists like Nelly Furtado and Apache Indian and more have lent their influences and unique ideas giving JoSH’s music that fresh sound which you can hear in every single song.

ANJULIE – takes the stage at 7:15 pm
Anjulie’s vivid storytelling make this Toronto-born singer, song-writer and performer relevant to the international music scene. Her first single on the Republic Record label resonated with Canadian fans – going double-platinum and garnering nominations for “Pop Video of the Year” at the 2012 Much Music Awards and “Dance Recording of the Year” at the 2012 Juno Awards. Anjulie is an established, vibrant Canadian musical talent.

Parking is available after 7 pm at no charge in all five downtown municipal parking garages. For garage locations, please visit the City’s website.